FEATURE AVAILABILITY: Root cause analysis is available to users of LogicMonitor Enterprise.

Root cause analysis (also known as RCA) leverages the auto-discovered relationships among your monitored resources, as discovered by LogicMonitor’s topology mapping AIOps feature, to determine the root cause of an incident that is impacting dependent resources.

When enabled for your alerting operations, root cause analysis highlights the originating cause of the incident, while optionally suppressing notification routing for those alerts determined to be dependent on the originating alert. This can significantly reduce alert noise for events in which a parent resource has gone down or become unreachable, thus causing dependent resources to go into alert as well.

How Root Cause Analysis Works

During an alert storm, many alerts relating to the same originating incident are raised in LogicMonitor and a slew of notifications may be sent out based on alert rule settings for each metric threshold that is exceeded. This can result in a flood of notifications for resources affected by the incident without a clear indication of which resources are the root cause of the incident.

Enabling root cause analysis addresses this issue through the following process:

Requirements for Root Cause Analysis

In order for root cause analysis to take place, the following requirements must be met.

Unreachable or Down Resource

In order to trigger root cause analysis, a resource must be unreachable or down, as determined by an alert of any severity level being raised on the following datapoints:

Note: Root cause analysis is currently limited to resources and does not extend to instances. For example, a down interface on which other devices are dependent for connectivity will not trigger root cause analysis.

Root cause analysis relies on the relationships between monitored resources. These relationships are automatically discovered via LogicMonitor’s topology mapping feature. To ensure this feature is enabled and up to date, see Topology Mapping Overview.

The ability to configure different settings for different entry points provides considerable flexibility. For example, MSPs may have some clients that permit a notification delay but others that don’t due to strict SLAs. Or, an enterprise may want to route dependent alerts for some resources, but not for others. In the Name field, enter a descriptive name for the configuration.

In the Priority field, enter a numeric priority value. A value of “1” represents the highest priority. In the event that multiple configurations exist for the same resource, this field ensures that the highest priority configurations are used. If you are diligent about ensuring that your entry-point selections represent unique resources, then priority should never come into play. The value in this field will only be used if coverage for an entry point is duplicated in another configuration.

In the Description field, optionally enter a description for the configuration.

Under the Select Entry-Point Dependency Chains configuration area, click the plus sign (+) icon to add one or more groups and/or individual resources that will serve as entry point(s) for this configuration. You can use explicit names or glob expressions in these fields.

Note: The ability to configure a single set of root cause analysis settings for multiple entry points means that you could conceivably cover your entire network with just one configuration.

Guidelines for Choosing an Entry Point

In a typical environment, you will want to create one entry point per Collector. The following diagrams offer guidelines for selecting these entry points. 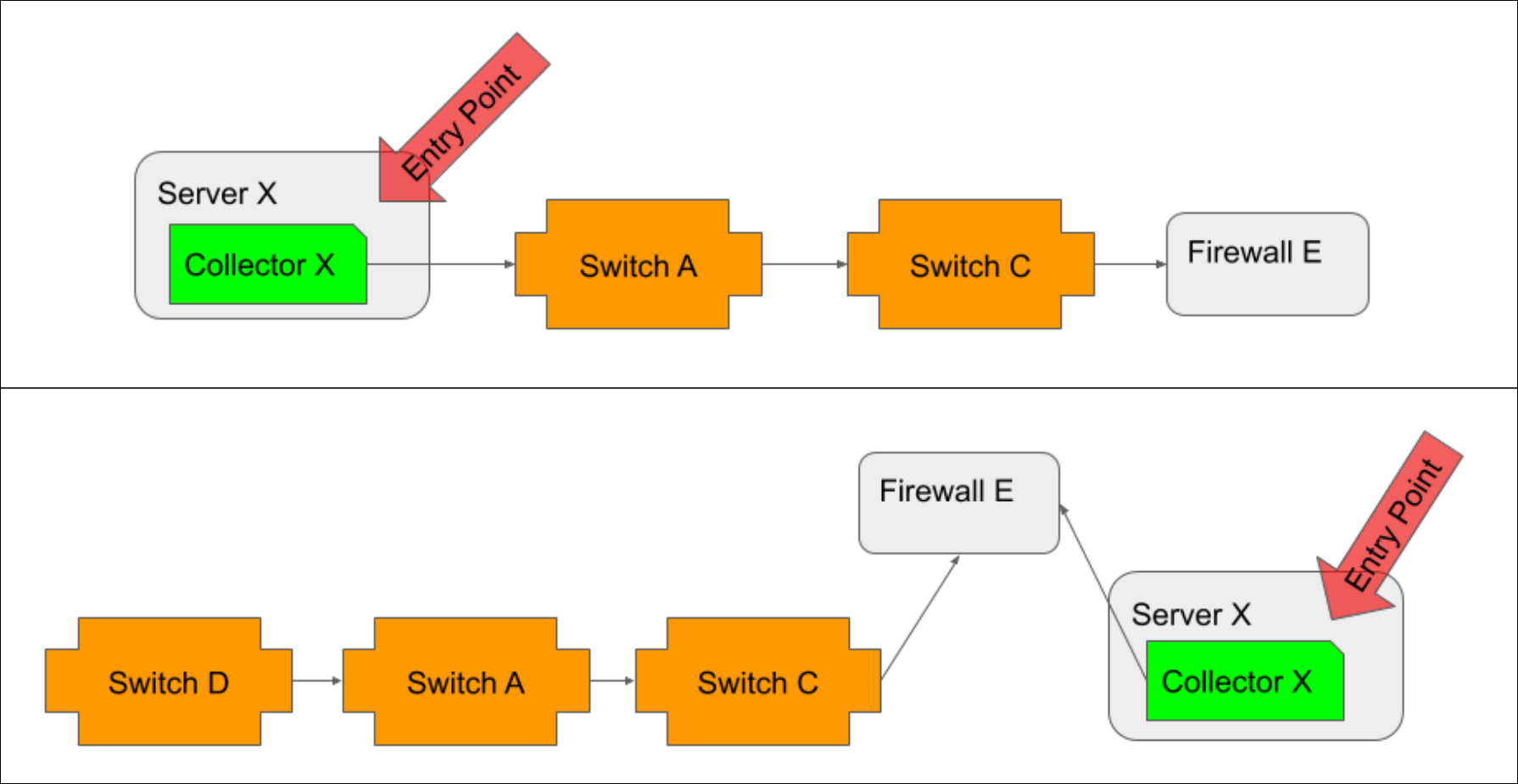 Note: To verify that topology relationships are appropriately discovered for the entry point you intend to use, open the entry point resource from the Resources page and view its Maps tab. Select “Dynamic” from the Context field’s dropdown menu to show connections with multiple degrees of separation. For more information on the Maps tab, see Maps Tab.

The selection of an entry-point resource establishes a dependency hierarchy in which every connected resource is dependent on the entry point as well as on any other connected resource that is closer than it is to the entry point. This means that the triggering of root cause analysis is not reliant on just the entry point becoming unreachable and going into alert. Any node in the dependency chain that is unreachable and goes into alert (as determined by the PingLossPercent or idleInterval datapoints) will trigger root cause analysis. 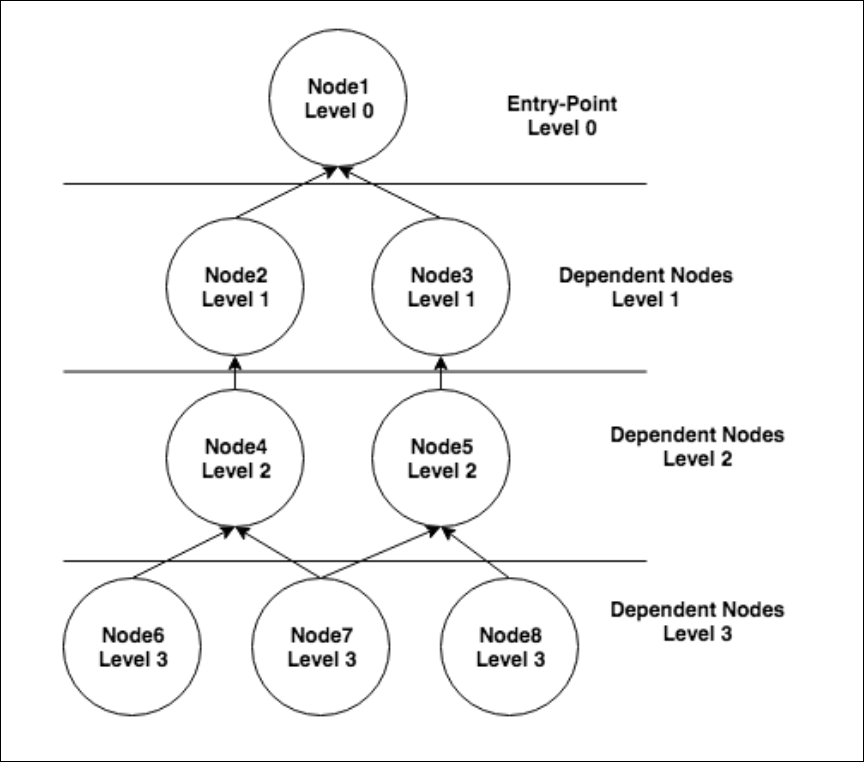 By default, the Enable Alert Routing Delay option is checked. This delays alert notification routing for all resources that are part of the dependency chain when an alert triggers root cause analysis, allowing time for the incident to fully manifest itself and for the algorithm to determine originating cause and dependent alerts. As discussed in the Viewing Dependent Alerts section of this support article, an alert’s routing stage will indicate “Delayed” while root cause conditions are being evaluated.

If routing delay is enabled, the Max Alert Routing Delay Time field is available. This field determines the maximum amount of time alert routing can be delayed due to root cause analysis.

If evaluation is still occurring when the maximum time limit is reached (or if the Enable Alert Routing Delay option is unchecked), notifications will be routed with whatever root cause data is available at that time. In the event of no delay being permitted, this will likely mean that no root cause data will be included in the notifications. However, in both cases, as the incident manifests, the alerts will continue to evolve which will result in additional information being added to the alerts and, in the case of those alerts determined to be dependent, suppression of additional escalation chain stages.

Note: Reachability or down alerts for entry point resources are always routed immediately, regardless of settings. This is because an entry-point resource will always be the originating cause, making it an actionable alert and cause for immediate notification.

Use the following options to suppress notification routing for dependent alerts during a root cause analysis incident:

Most likely, you’ll want to check both options to suppress all dependent alert routing and release only those alerts determined to represent originating cause. However, for more nuanced control, you have the ability to disable only reachability alerts—or only non-reachability alerts. This may prove helpful in cases where different teams are responsible for addressing different types of alerts.

Note: If you want to verify the accuracy of originating and dependent alert identification before taking the potentially risky step of suppressing alert notifications, leave both of these options unchecked to begin with. Then, use the root cause detail that is provided in the alert, as discussed in the Alert Details Unique to Root Cause Analysis section of this support article, to ensure that the outcome of root cause analysis is as expected.

Alerts whose notifications have been suppressed as a result of being identified as dependent alerts are denoted with an icon that features a bell with a slash through it.

Columns and Filters Unique to Root Cause Analysis

The Alerts page offers three columns and two filters unique to the root cause analysis feature.

Note: The columns mentioned in the following sections are not included in the alert table by default. They will need to be added using the Alert Table Settings dialog, as discussed in Managing Alerts from the Alerts Page.

The Routing State column displays the current state of the alert notification. There are three possible routing states:

The Dependency Role column displays the role of the alert in the incident. There are three possible dependency roles:

LogicMonitor offers two filters based on the data in the Routing State and Dependency Role columns. The criteria for these filters lines up with the values available for each column. You can use the “None” criterion that is available for both of these filters in conjunction with another criterion in order to get an overall view of what your environment considers to be actionable alerts. For example, as shown here, selecting both “None” and “Originating” for the dependency role filter will display all alerts deemed originating via the root cause analysis algorithm as well as all other alerts across your portal that were never assigned a dependency role (i.e. they didn’t undergo root cause analysis). The alert details for an alert that is part of a root cause analysis incident carries additional details related to root cause—these details are present in both the LogicMonitor UI and alert notifications (if routed).

The alert type, alert role, and dependent alert count carry the same details as the columns described in a previous section. If the alert is not the originating alert, then the originating cause and direct cause resource names are also provided. Direct cause resources are the immediate neighbor resources that are one step closer to the entry point on which the given resource is directly dependent.

Approximately five minutes after saving a root cause analysis configuration, the following information is captured in LogicMonitor’s audit logs for the “System:AlertDependency” user:

For more information on using the audit logs, see About Audit Logs.

Using the entry point and dependent nodes detail captured by the audit logs (as discussed in the previous section), you may want to consider building out a topology map that represents the entry point(s) and dependent nodes of your root cause analysis configuration. Because topology maps visually show alert status, this can be extremely helpful when evaluating an incident at a glance. For more information on creating topology maps, see Mapping Page.